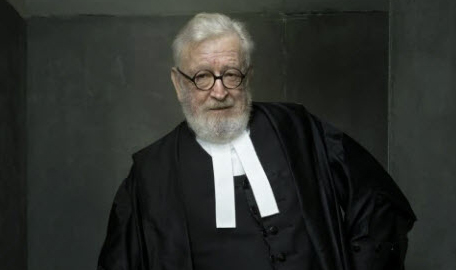 12 months ago he finally quit a heavy smoking habit by switching to vaping. This is his story in the Financial Review Today (with thanks to Robert Richter and journalist Jill Margo).

Read his story and the rest of the article HERE.

When he arrived at Melbourne University in the mid-'60s, smoking was in vogue. Hanging around the library, it made his fellow students look worldly and sophisticated, so he followed suit.

For the next 50 years he fitted in a pack-a-day, and although he often tried to quit, he was in a state of such deep addiction, he couldn't.

Without nicotine, he couldn't run the legal practice that has made him a celebrity barrister.

Then early last year, during a scan for an unrelated issue, doctors happened to detect a very small cancer developing on one of Richter's lungs.

After successfully removing it, the surgeon declared the barrister – known in court as The Red Baron – had "dodged a bullet". No further treatment was required and although the prognosis was excellent, he was given absolutely no option but to quit.

So, Richter QC asked about inhaling nicotine vapour and was relieved at the reply. "He said it will not damage my lungs and that it is 95 per cent safer than smoking cigarettes."

While quitting completely was the better option for Richter, he couldn't do it.

"You see, what long-term addicts want to feel most of all, is a sense of normalcy.

"I'm in the middle of a heavy-duty, strenuous endeavour in terms of legal practice and in order to be able to concentrate and to sleep, I need to feel normal.

"It was a no brainer. I could go out and get nicotine patches or gum but their release of nicotine is too slow to ameliorate the craving.

"As just about any addict to any kind of drug would know, what the addict craves is swift release from the cravings.

"I've now been vaping for a year and have been able to function regularly and sensibly. If I wasn't vaping nicotine, I don't believe I could. It allows my body to act normally, without the stresses and anxieties that nicotine withdrawal produces.

"But what I can't get over is the complete hypocrisy of me being able to buy a packet of cigarettes and smoke them to relieve my craving. That is perfectly acceptable, but if I want to take something that is less harmful, I can't go to a shop and buy nicotine liquid so I can vape it."

Richter has a prescription for nicotine liquid from his doctor.

Richter says allowing an addict to vape is not designed to encourage addiction, but is a recognition that addiction needs to be treated, just as diabetes is treated with insulin.

‘‘Anyone who has the slightest regard for harm reduction would recognise this is an obvious thing to do, but such is our attitude to addiction in this society that we’d rather have people die unnecessarily from continuing to smoke.

‘‘I would find acceptable a regulatory system which includes the usual prohibition of sale to under 18s and sale to non-smokers’’ he said.