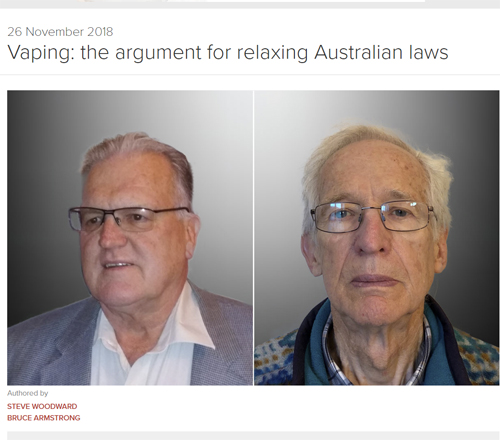 THE evidence that persuading cigarette smokers to switch to less harmful products saves lives has been around for a long time.

Cigarettes kill. We’ve known that since 1950 (here and here),  when it became clear that the greater the exposure to tobacco smoke, as measured by depth of inhalation, amount of tobacco smoked per day and number of years smoked, the greater the risk of disease and death from smoking tobacco.

Doll and colleagues concluded in 1994 that “about half of all regular cigarette smokers will eventually be killed by their habit”.

Doll and colleagues also found that if smokers stopped smoking tobacco, their risks of dying from a tobacco-related disease reduced dramatically, with the tobacco-related excess risks approaching zero after 20 years.

So, too, does harm reduction, and the evidence for that has been around for a long time as well.

In its 1962 landmark Smoking and health report, the Royal College of Physicians of London suggested: “Since pipe and cigar smokers have a smaller risk than cigarette smokers of developing lung cancer, bronchitis and coronary heart disease, the possibility that cigarette smokers could be persuaded to change to these safer forms of smoking must be considered”.

In 1997, Wald and Watt published their Prospective study of effect of switching from cigarettes to pipes or cigars on mortality from three smoking related diseases. Their research was confined to men and the three diseases were lung cancer, ischaemic heart disease and chronic obstructive lung disease, the major tobacco-related diseases causing death.

Among other things, they found that the men who gave up cigarettes and switched to pipes and cigars — “switchers” — enjoyed a 46% reduction in mortality from the three major diseases when compared with the men who continued smoking cigarettes. In practical terms, by the end of the research’s follow-up period, 35 deaths from the three major diseases had occurred in 522 switchers.

If the switchers had experienced the same mortality as the continuing cigarette smokers, they would have suffered 76 deaths. Thus 41 deaths from these diseases were prevented by switching to pipes and cigars, representing 8% of switchers.

The question then becomes, what role can e-cigarettes play in harm reduction for cigarette smokers?

About 3.2 million adults vape in Great Britain. This includes 1.7 million ex-smokers, 1.4 million current smokers and 100 000 never smokers. The Royal College of Physicians of London estimates that vaping carries about 5% of the health risk of continuing to smoke cigarettes.

Based on these numbers, it can be argued that the health benefit to cigarette smokers who switch is vastly greater than the possible harm to never smokers who take up vaping. For the 1.4 million continuing smokers who also vape, no significant health gain nor material health loss can be expected.

There are about 2.5 million smokers in Australia. If the prohibitions on vaping in Australia were lifted, and the same proportion of cigarette smokers switched to vaping as in the United Kingdom, then tens of thousands of Australian ex-cigarette smokers could live healthier lives and avoid premature death from diseases due to tobacco smoking.

In addition, there could be other community benefits associated with quitting smoking such as reduced hospital costs and reduced absenteeism from illnesses caused or exacerbated by smoking.

Distinguished British biostatistician Sir Austin Bradford Hill said in 1965: “All scientific work is incomplete – whether it be observational or experimental. All scientific work is liable to be upset or modified by advancing knowledge. That does not confer upon us a freedom to ignore the knowledge we already have, or to postpone the action that it appears to demand at a given time”.

Vaping is probably far less dangerous to health than smoking pipes or cigars. If vaping was as dangerous as pipes or cigars, then we could expect cigarette smokers who switch to vaping to enjoy a 46% reduction in mortality from the three major diseases investigated in the Wald Watt study.

Because of the substantial benefits of harm reduction that are likely to be gained for smokers if Australia takes a more permissive approach to vaping, we believe that Australia’s vaping laws should be reviewed.

In practical terms, we see no need for legal and regulatory controls on vaping to be any more permissive than those on tobacco smoking. The cost of vaping paraphernalia should not be subsidised through the Pharmaceutical Benefits Scheme. However, the tax rate on vaping paraphernalia should ensure that the nicotine dose equivalent cost of vaping is less than it is for cigarettes to give low-income – indeed all – smokers an incentive to make the switch.

Steve Woodward was a Wittenoom asbestos researcher before becoming Australia’s first full-time antitobacco lobbyist. Through the 1980s and 1990s, he led campaigns in all states and territories, and in the UK parliament.

Emeritus Professor Bruce Armstrong is an Australian epidemiologist and public health physician. He is recognised nationally and internationally for his research into the causes and control of cancer, particularly skin cancer.